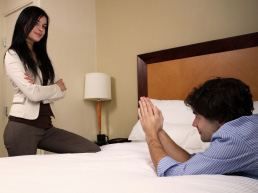 Here's a great way to ruin a relationship with a woman.  Be available for her 24/7.  Let her choose when you go out and what you do.  Agree with her on everything and tell her that she's your princess every time you see her.  If she can't see you one day during the week then get weepy on her and tell her how much you'll miss her.  Write her a poem while you're apart.  Be sure to drop plans that you've made with your friends on a moments notice if she needs you for something.

This is beyond infatuation.  Acting in the way described above is not only clingy, it's not manly and demeans you as a person.  And it certainly won't impress a woman.  If anything it will make them run the other way.

As I've already discussed in other articles, women are turned off by desperate men.  If you shower her with unlimited attention and she believes that your life revolves around her, then she'll assume something is wrong with you.  How do you have all this time available to spend with her?  Don't you have your own life?  Women want a man with a life which includes his own hobbies, interests, and  friends.  They certainly don't want to BECOME your life in its entirety.  What a huge turn off.

Women want to be challenged.  Yes they like flowers and poetry and so forth, but they also want a man.  Real men are busy.  They are passionate about life and their interests.  Men don't have time to spend every waking hour pursuing any single woman.  Men also don't take disrespect from women.

Women will push you to see how much you'll take.  If you always agree with everything they say, always changing your plans to suit her needs, then there's a word for you.  You're a "pushover" to put it politely.

Be your own person.  Take charge.  If you'd like to go out on a date then call her and tell her where and what time.  If she can't go then too bad.  Tell her it's unfortunate and that you'll think of her while you and whomever else you take are having fun.

Stand up to her.  If she wants you to hang out with her instead of going out with your friends as planned, tell her no.  She'll act disappointed and perhaps even angry but she'll respect you for it.  And respect is what it's all about.  The second a woman loses respect for you, you've become her doormat.  It's all over.

This is one reason why so many marriages fail.  The man finally makes a commitment and is totally devoted to his woman.  She pushes him a bit and he becomes so afraid of losing her that he does whatever she wants.  The marriage is over before it has really begun as she'll lose respect, become bored with him, and the marriage will end.

If you truly love someone you need to be willing to let them go.  This is so critical and yet misunderstood by so many men.

So how do you not act clingy?  Have a real life with real interests and real friends.  Be adventurous, take risks, enjoy life!  In our article on Inner Strength we speak about how women won't like you until you like yourself.  It's the truth.  Lead a rich, fulfilling life apart from the woman/women you are with.  Your woman should compliment your life, not be its sole purpose.  If your life revolves around her she'll know it and eventually lose interest.

Don't be afraid to challenge her.  If she spouts off bull#@*t then call her on it.  If you disagree with her then say so.  Stand up to her.  Act like a man.  She'll respect you for it in the long run.  In fact, this is the only way a relationship has any real chance of achieving long term success.

If your woman does leave, NEVER call and beg her to come back.  Don’t ask her girlfriends why she left you.  Don’t let her know that it has effected you AT ALL.  Worst case you lose her but at least you can hold your head up high and know that you acted like a man.

You should always end a relationship on YOUR terms.  If a woman begins to pull away, the worst thing you can possibly do is cling tighter.  That will simply hasten her retreat.  On the other hand, if you act like a man and basically shrug it off, this will often times make her pause.  Show strength instead of weakness and she may just reconsider.

A healthy relationship requires mutual respect from both parties.  Don't demean yourself by giving in to your woman's every desire.  It's better to lose someone than to be stuck in an unhealthy, unsatisfying relationship, not to mention the damage it can do to your self respect.