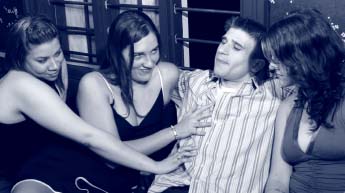 You're out for coffee with your good friend.  She's complaining about the latest jerk she's been dating.  After being intimate he never cuddles, he doesn't call when he says he will, he flirts with other girls in front of her, and he forgot her birthday last week.  If only he could be like you she says sadly.

You not only didn't forget her birthday, you had 24 roses sent to her work and then took her out for a nice dinner where you hoped she'd see how much better you are than her boyfriend.  Unfortunately all she did is complain about her boyfriend the entire time.  She did give you a peck on the cheek when you dropped her off at home.  Score!

You're only her friend because you did something early on that made her stop viewing you as a man.  Welcome to friendship hell!  You now get to spend hours listening to the woman you dig talk about her problems with other men!  You are an honorary chick friend.  Hooray for you!

Jerks have short term success with women because they mimic real men.  Women date jerks because they're attracted to their masculinity.  Jerks are confident, can be fun, may have a brilliant sense of humor, and they sure as hell don't worship women.  You're not gonna see jerks writing their women poetry or bringing them flowers.  But they do act like men to a certain extent.

Jerks and nice guys are two sides of the same coin.  Often times nice guys will get so fed up with getting dumped on as in the example above, that at one point they just snap and go to the opposite extreme.  They think "Well I'm not getting anything by being nice so I'll treat them like crap and see what happens."  They then begin to see short term success but don't understand why they can't develop a lasting relationship with a woman.

Jerks can get women but they can't keep them.  Women want a bad boy that's nice to them.  They want a tough guy with a heart.  Jerks act like bad boys but don't have any substance deep down inside.  They're selfish and empty on the inside.  Women keep waiting for the jerk to open up and show them that he's not really a jerk on the inside.  After they've taken a certain amount of abuse they move on to the next jerk.  And if you're their honorary chick friend, then you get to hear about each and every one!

Don’t be a nice guy or a jerk, control yourself.  It goes back to being comfortable with your masculinity.  Don’t hide it, don’t throw it in other peoples faces, just be a man.  Be assertive, confident, and decisive.  Never be a push over.  Don't be afraid to disagree with your woman, but act honorably towards her.

The jerk qualities that women find so attractive are confidence, and not acting clingy.  Jerks don't bend to the will of a woman, they're a challenge.  That's why in previous articles we emphasize how important it is not to call right away after a date, or to shower women with gifts and meaningless praise.  By doing this you're acting like the "nice guy" who is a pushover.

You never open up to a woman right off the bat, they have to earn it.  They have to earn any affection you show them and that's why you don't give them poetry and flowers immediately.  Those things are for later, once you've gotten them addicted to your attention.

You don't have to act like a jerk to get women.  Just act like a man.  Women don't enjoy being treated like garbage.  They just want a man who isn't a pushover and will step up to the plate when he needs to.  Be confident, assertive, and don't take any crap from them.  But once a woman has earned your respect and trust, then open up and treat her like a woman should be treated,  with love and mutual respect.