The Art Of Listening 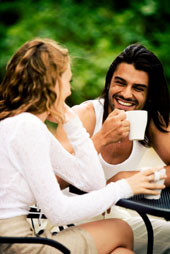 What's the first thing most guys do when they want to impress a new lady that they've just met?  They starting talking about how great they are.  "I've done this, and I've done that," and look at me *thumps chest loudly like a gorilla,  "Look what I can do!"

Why do we want to let her talk?  Because women love mysterious men.  Don't ruin it for her by letting her know every single detail about your proudest achievements within the first 10 minutes of meeting her.  Yes, eventually you'll need to open up and start letting her in a bit.  But that comes later.  At the first you don't even know if she's worthy of getting to know you yet.  The first month after meeting a new lady that you think you might like, your focus should be on discovering whether she's worthy of your attention, not the other way around.

By letting her talk you're discovering which category to place her in, one night stand, dating material, or possibly something more serious.  Let her talk.  Be confident, funny, and playful on your dates, but give out as little information about yourself as possible.  For the first three weeks when one date asked what I did, I merely grinned slyly and said "I do what I do," and then immediately switched the conversation back to her.  Women eat this stuff up.

Even if you don't have anything to be proud of she doesn't know that!  She'll daydream and fantasize about how mysterious you are.  Ideally even a long term girlfriend or wife should be discovering new things about you for years to come.

After being with the same woman for several years, one day she came into the bedroom looking concerned and asked if I was planning to fight someone?  Genuinely puzzled I said "Of course not, why?"  Apparently she'd found some websites saved on my laptop having to do with martial arts and self defense.  I told her that I'd been interested in learning various fighting techniques for years, which is the truth.  I then demonstrated some self defense moves for her.  She was really surprised.

The second a woman becomes bored with a relationship it's over.  Be someone that's exciting to be around.  Learn new hobbies, follow what interests you, travel.  Don't do this to impress women but to make your life rich and worth living.  The added benefit is that women will become addicted to your energy.

When you first meet someone don't talk about yourself.  Have fun with her, crack jokes, but clam up when the conversation turns to specific areas about your life.  Turn yourself into a mystery and women won't be able to get enough of you.